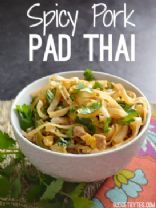 
Instead of making a sauce from scratch, I used oyster sauce as my base and added a healthy dose of fish sauce and lime juice for that pad thai flavor. I didnt have access to any nice Thai peppers, so I just added some good ol sriracha for heat (cant go wrong with sriracha!). If you want to make a mild version, just leave the sriracha out and youll still have an amazing, savory, pad thai-like sauce. I kept the vegetables simple, with just some onion, bell pepper, and garlic, but you could add shredded carrot, bean sprouts, or some snow peas to veg it out some. I had 1/2 lb. of ground pork in my freezer that needed to be used, but you could sub with ground chicken, turkey, or just leave out the meat all together! Woot.

Oyster sauce and fish sauce shouldnt be too expensive at most major grocery stores and if you make Thai or Asian food even just a few times per year, theyre worth it. Both keep for extended periods when refrigerated, so you dont have to worry about the rest of the bottle going to waste.

Oh, one more note. This dish is not saucy. The sauce gets absorbed into the noodles so you have a wonderfully flavorful noodle, plus a light coating on the meat and vegetables. If you like it saucy, I suggest doubling the sauce ingredients. :)

(no ratings)
Chicken or pork marinade


Delicious marinade for chicken or pork!


Yummy healthy alternative to take out!


Use veggie broth to keep it vegetarian, if you like. Mix up the veggies to your taste and what's in the fridge - try mushrooms or baby bok choy (yum!)


This is made in the slow cooker. Easy to prep


Serves 4 as an appetizer as part of multicourse meal


This is a Filipino noodle dish. It's usually cooked for special occasions. I like to cook it every now and then at my house.

(no ratings)
Cauliflower and egg curry
Submitted by ZOMBIESNAIL


One of our favorite easy, go-to recipes. Not low in sodium, but tastes very good. 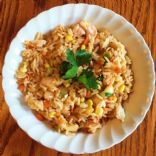 
Fried rice is a classic and this recipe provides an easy, delicious and nutritious meal perfect for lunch on the go!


Basic Brown Sauce for Stir Fry. Use any protein and veggies you like. Perfect for Beef and Broccoli!


Great flavor and fun to make


This time with less oil, but with coconut cream. Add cooked potato as needed for carbs 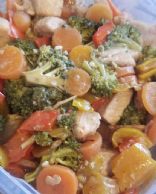 
This easy Chicken Stir Fry recipe is loaded with fresh veggies and the most delicious sauce made with honey, soy sauce, and toasted sesame oil!