Colorful and delicious, this salad is satisfying both in taste and appearance.


Stir quinoa into your favorite hearty salsa, add avocado and black beans, and what do you get? A simple meal you won't soon forget!


Gazpacho is one of my favorite summer meals, and it's no coincidence that it's also one of the easiest to make. It's simply a chilled, usually blended vegetable soup of Spanish origin.


An easy, low-calorie baked tilapia recipe to throw together for a delicious meal!


This is such a hearty savory soup--and it's vegan! The color alone should win you over. By roasting the vegetables you get a sweet smoky smell and taste.


What a treat these burgers are! I love how the tangy flavor of the sauce and the peppery notes of the greens play off the savory burger.


We've slimmed down this classic hefty sandwich--so you can enjoy it more often!


Take a break from eating corn on the cob to make this simple soup. Pair with a grilled steak and green salad, and dinner's ready.


A comfort food favorite. Serve with steamed veggies to make it seem healthier.


This low carb bread makes a great sandwich for breakfast or lunch. Quick and easy, too.


Make this quiche in the blender. No crust needed - makes its own crust while it bakes


A hearty, healthier take on an iconic American meal.


Panzanella is an Italian salad that can be found on trendy bistro menus in the hot summer months. This salad was invented when times were tough, as a way to use up stale bread.


This quick and easy lunch only uses 5 simple ingredients!


This super delicious chickpea spread is perfect as a dip for veggies; spread on whole wheat/whole grain toast or bagel and with thin cucumber slices; spread a thin layer on a wrap, add a light sprinkling of feta cheese, then add romaine, thin cucumber strips and three coarsely chopped kalamata olives - roll and enjoy!


The meat does not need to be seared in skillet first to make this fall-apart tender, pulled BBQ beef for sandwiches. This recipe has so much flavor no one will notice the Worcestshire sauce & the salt were deleted to reduce sodium (you may also use low-sodium catsup and BBQ to reduce sodium further). Using molasses instead of brown sugar and Worcestshire gives a depth of flavor and authenticity, while reducing sugar & sodium. It is great to take to picnics, buffets, or tailgating. Freezes well.


Based off of my mother's recipe.


This traditional Vietnamese dish is easy to make and perfect for a hot day when you want something cool and filling.


A mayo-free twist on a tuna sandwich!


A light and tasty whole meal.


Fantastic and super easy beans -- great lunch or side dish 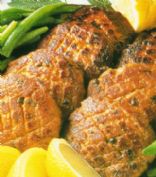 
These are really low in fat and carbs and can be served in a bun or with a salad. Very tasty.

Will spread if you use the George Foreman Grill, normal skillet is fine.