I have a really hard time eating fish and I find that this recipe helps me get my requirement of fish. Use it for a main course with a side salad and some fruit. It's splendid!


A light easy smoked salmon salad for a special lunch


Realy Yummy Dim Sims perfect for an appetizer at a dinner party!


Low fat with lots of protein and iron.


My version of Fish Tacos, I didn't have shredded cabbage so I used iceburg lettuce and they were so good anyway.
6 Weight Watcher Points for 2 tacos


A delicious easy to make quiche with smoked salmon and spinach


Summer food at its best!


Adapted from Orange Roughy recipe in Eating For Life


A quick to prepare but yummy main dish - especially good for parties as it looks good too!


Variation on a traditional recipe taught to me in
Karluk Village on Kodiak Island, Alaska

(no ratings)
Shrimp over Angelhair Pasta


A yummy, full flavored dinner that you don't need to feel guilty about! 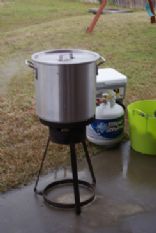 
The "Beaufort Boil" originates from the rich native Gullah people who still live on the sea islands near Beaufort, South Carolina.

Who knew that boiling a pot of shrimp, sausage, potatoes and corn on the cob would become so popular that it is now considered South Carolina's version of the "Backyard Barbecue" .
(cont...)


There was not very much that I could change in this recipe from: Emeril Lagasse, host of Emeril Live.

I love his show!


WoW! Another great appetizer from Hawaii!


Aimed to fill up yet have very low calories. Low in sodium


This spicy seafood salad calls for a lot of ingredients but is worth the effort. The whole-wheat macaroni pasta is toothsome and you donât miss the fat in the mayo with all the other flavours blending into a tartar sauce â like dressing.


If necessity is the mother of invention, then Union Square Cafe's tuna burgers are one of our menu's most successful children. To complement the sweet-hot tuna burger flavours, choose a fruity white wine. It's also great with an ice cold glass of beer!