I've seen similar soups listed as detox soup. My mom has made this soup for years and I've always called it the "2 Cupper" soup because, well you can see why when you read the list of ingredients.


I started with a basic chicken and rice soup and tweaked it over the years until I ended up here.

(no ratings)
Remoulade Sauce made with greek yogurt


I made up this sauce as I went along trying to copy the flavor of a cajun style dipping sauce with less fat than a mayo based sauce. It turned out pretty good. 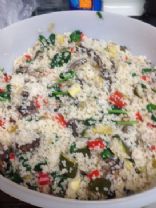 (no ratings)
COUSCOUS WITH TOFU AND VEGGIES


Made this up as I went along. Turned out quite yummy so now I make it all the time.

I didn't include the 2-3 hours used to press/drain tofu in the prep time.


Got the idea from Chef Meg, but I used what I had at home.


Yummy crabcakes make a great sandwich, main course or even appetizers. A spicy remoulade sauce goes great but I did not figure this in my recipe calculation.

(no ratings)
Tilapia with Lime, Cilantro and Ancho Pepper


Flavorful stew. Just right for a cold day.
Read thru cooking instructions before beginning to cook.


This is a recipe that you prepare the night before serving.

Someone at work brought in their french toast casserole and it was to die for! I only had two bites though, after he told me how much butter and sugar was in it. Soooo disappointing...so I tried my own slimmed down version. It's still not the best for you, but I made it for a large group staying for the holidays and was able to have a normal sized serving without having to explain why I was eating such a small portion. It was delish!

Great with a side of turkey or light breakfast sausage if you can afford the extra calories.