Just something I like whipping up for breakfast. I usually have a glass of this with a slice of whole grain toast and a piece of fruit. This smoothie is also yummy made into creamsicles in one of those little popsicle makers! 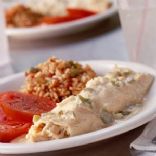 
My favorite dish at a local Mexican restaurant is their Chicken Enchiladas with Creamy Green Chile Sauce. I had to try and find a way to lower the fat and sodium so I could enjoy these without the guilt! I tweaked that recipe a bit to lower the sodium and fat, and came up with a winner! My husband and teen daughter gobble these up!


This delicious dip comes from a recipe I tweaked to make it lower in fat and calories. My family gobbled this up at a recent holiday party! 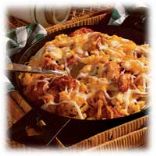 
Delicious! I just threw this together last minute and it reminded me of a Cuban dish I had in Navarre, Florida while visiting a friend!
I used up ingredients I had on hand since I couldn't get out to the store because of the snow and for creating this dish from scratch, it was a huge hit with my DH and picky daughter. 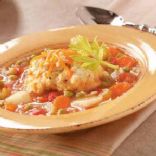 
As delicious as it is nutritious, this quick and easy hearty low-fat vegetable stew hits the spot in cold fall and winter months!


This is a recipe I saw in a local paper that I tweaked a bit to make it lower in fat, cholesterol and sodium. It is absolutely delicious as is, but you may serve it on toasted bread slices if desired. My family loves this for breakfast or brunch!


Delicious and filling! Instead of loose ground beef like this soup usually contains, I make little porcupine balls with it! A little time consuming to make the tiny porcupine balls, but the end result is worth it! My DH and daughter love this soup. Keeps well in freezer if you have leftovers.


Delicious and easy main dish! Note: Nutritional info calculated is if you use ALL of the egg whites and chicken coating mixture, but you should have some of it left after coating the chicken breasts, so the nutritional counts will be lower than indicated by the recipe calculator.


My spiced up spin on plain guacamole. Serve with tortilla chips or veggie slices. My guacamole is a hit at parties!


This casserole is actually a Jewish dish called Tzimmes. I adapted this from a higher fat/sugar version a friend of mine makes. It is rather yummy and satisfying!


Wonderful as a side dish or even a meatless main dish! To keep this vegetarian, you may use vegetable broth in place of the chicken broth.


One of my favorite on-the-go breakfast sandwiches. I throw just about anything together to make these, but this combo is one of my faves. 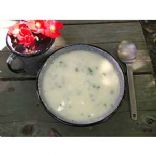 
This soup is delicious and satisfying on a cold winter day! You can forgo the celery seed if you like less celery flavor, and also add salt to taste, but it will change the sodium content in the nutritional information if you do.


This parfait is a "fool" because high sugar or high fructose corn syrup whipped cream is usually used, but here we replace it with sucralose sweetened yogurt! This is an excellent desert or treat if you are craving something sweet but don't want all the calories with it! You can substitute any berry of choice for the raspberries if you prefer.


I adapted this recipe from a full fat/sugar version I saw on Care2.com. This cake is so moist and delicious you don't miss the flour at all!! Totally gluten free! 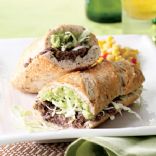 
A Mexican-style torta is just like a burrito, except the âwrapperâ is a hollowed-out roll instead of a tortilla. Here itâs filled with spicy mashed black beans and a quick guacamole. Take this vegetarian version to another level (and add calcium) by melting Monterey or Pepper Jack cheese onto the bean side of the sandwich. Serve with: Mexican corn or Spanish rice if you prefer. I adapted this recipe from EatingWell.com. You can use cooked shredded chicken breast in place of the beans if you prefer!


A family recipe that I tweaked a bit. My mother made this with turkey ham instead of turkey breast, but the sodium content when made with turkey ham is much too high. The "stew" is really more along the lines of a soup consistency, but you can thicken the broth with cornstarch if you desire a thicker "stew". Enjoy!


This is a healthy spin on a wonderful Jewish side dish. It can also be used as a dessert! You can use water-packed pineapple tidbits in place of the peaches if you prefer.


I created this dish for dinner one day when I was pressed for time with ingredients I had on hand and it was an instant hit! A low-carb delight as is, but you can serve over wide, whole-wheat noodles or brown rice if you are not watching carbs.


Low carb and very yummy! I threw this together with ingredients I had on hand and it turned out delicious! My husband and daughter could not get enough of it! I love crockpot recipes, especially in winter. You can use low fat/reduced sodium cream of chicken soup if you want to reduce fat and sodium more and serve this over rice or wide egg noodles if you aren't watching carbs.


Very yummy! Not low-cal or low-sugar, but as a delicacy once in a while, especially during fall and winter months when these squash are at their peak, this is a real treat! To save on prep time, I "cheat" and buy fresh butternut squash already cubed and packaged from my local grocery store. :o) The sodium content figured out by the recipe calculator is definitely wrong. Someone incorrectly listed 4 cups of butternut squash as having almost 2,000 mg of sodium when 4 cups has only 24 mg! The correct sodium content in this recipe is less than 50 mg per serving! 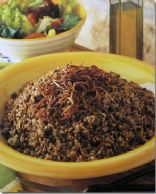 
Pronounced ma-zhe-dra, this is a vegan Middle Eastern bulgur wheat, lentil and onion pilaf that is incredibly yummy! I first had it at a now (unfortunately) defunct Middle Eastern cafe and the full-blooded Syrian owner told me what the ingredients were, so after they closed and I was craving this dish, I threw together the ingredients in amounts I felt were similar to hers and it turned out pretty authentic tasting! You can also use equal amounts of whole-grain brown rice instead of the bulgur, but I prefer the bulgur wheat. Nutritional info listed is using the bulgur.


These deviled eggs will leave you feeling like an angel since they are low cal, low sodium, and low carb!


This is my own version of this stuffing. It is absolutely tasty AND healthy! Ezekiel Bread is a dense, chewy, flour-less bread made with a variety of whole grains that are minimally processed to keep them as close as possible to what nature intended them to be. You can find it in the frozen section of healthy food grocery stores such as Whole Foods, Wild Oats or Trader Joe's. I had to guesstimate how many tbsp 10 shallots (baby onions) would be, so the calorie content may be slightly off because of that! You can also sub any loaf of whole grain bread for the Ezekiel Bread if you can't find it and vegetable broth instead of chicken if you want to keep this vegan, but it will change the calorie content of the recipe as posted. Recipe nutritional info as posted uses plain Ezekiel Bread and chicken broth.


Turn your Thanksgiving turkey leftovers into a delicious new healthy dish. Serve with a fresh green salad for a complete meal.


Wanted something different from plain turkey burgers, so I threw this recipe together with ingredients I had in the house and they turned out great! My husband loved them, and my daughter, who usually balks at anything with a lot of spinach in them, actually liked these!


This salad is so yummy! I wanted to get creative with a salad for a main course one day and threw this together and my family loved it! If you can't find the Ken's dressing I listed, you can substitute it for another that is similar, but keep in mind it will change the nutritional value a bit. Any mixed greens work in this salad, but I prefer it with mixed baby greens that include spinach.


This is high in sodium, so if you are watching salt, this isn't the salad for you. If you can't find the House of Tsang Bangkok Padang Peanut Sauce I have listed, you can use whatever brand you prefer, but doing so will change the nutritional value in this recipe. I like this brand because it is tasty, but be forewarned, it is very hot and spicy! You can find most of the ingredients in the Asian/Oriental foods aisle at your grocery store.