I found this recipe via Pinterest and made it over to be more calorie friendly, plus added a delicious dipping sauce. The Baked Coconut Chicken Tenders are crispy tender morsels of deliciousness, and dipped in my Honey Wasabi Dipping Sauce they are a little piece of heaven in your mouth. Try this with my Leaner Avocado Wasabi Salad for a marriage of fresh flavors that burst on the palate.


For a video demonstration of this recipe, and many more delicious dishes, "like" me on Facebook at www.facebook.com/ColleensKitchen1

N
ote that the nutritional value of the marinade is halved since most is discarded.


For a video demonstration of this recipe, and many other delicious dishes, "like" me on Facebook at http://www.facebook.com/ColleensKitchen1

(no ratings)
Chicken Scallopini in a Creamy, Cream-less Saffron Sauce


For a video demonstration of this recipe, and many other delicious and healthy dishes, "like" me on Facebook at http://www.facebook.com/ColleensKitchen1


This easy fix-it-and-forget-it dish is a great solution to a busy weeknight dinner. Make sure to select the leanest cut of roast you can find (I selected a top sirloin roast) and trim any visible fat. For a video demonstration of this dish, and many other great recipes, "like" me on Facebook at www.facebook.com/ColleensKitchen1


For a video demonstration of this recipe, and many other great dishes, "like" me on Facebook at http://www.facebook.com/ColleensKitchen1

(no ratings)
Asparagus Baked with Shrimp, Tomatoes and Feta


Asparagus is so fresh and tender in the spring, I just love to find an excuse to cook with it. This Greek inspired dish is just the ticket. For a video demonstration of this recipe as well as many other dishes, "like" me on Facebook:
http://www.facebook.com/Colle
ensKitchen1


This may sound like an odd flavor combination in a traditional Mexican dish, but it is super yummy and super good for you. For a video demonstration of this recipe as well as other great recipes, "like" Colleen's Kitchen on Facebook!


I give credit to JENNLOVE for inspiring this recipe with her Crustless Spinach, Onion and Feta Quiche recipe. I love to wander through the farmer's market, pick out the seasonal fresh vegetables, and figure out later what to do with them. This is how this dish came to be. Because of the skim milk and reduced amount of eggs, it is more similar in texture to a frittata than a true French quiche, which is richer and creamier. But it is still very good and makes a good dish for dinner or a nice Sunday brunch. My son (Mr. I-Hate-Quiche) loved this and gobbled down two slices.


For a visual demonstration of this recipe, as well as a number of other great dishes, "like" Colleen's Kitchen on Facebook! 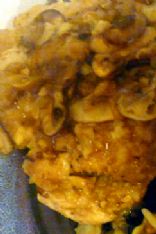 
This is a pan-seared version of chicken marsala without the bread crumbs or traditional frying to reduce the fat.


This twist on Sunday chicken dinner incorporates flavors common to Mediterranean cooking - lemon juice, olive oil, wine, and herbs. Roasting the vegetables with the chicken, infuses them with great flavor. I love to use the leftover carcass for making homemade chicken stock. (Note that for the nutritional information I've halved the value of the marinade since much of it ends up in the bottom of the pan.)


This recipe comes courtesy of Giada De Laurentiis. I made some adjustments to the recipe to trim down the calorie and fat content. When buying the beef stew meat, I actually cut the cubes in half to make them easier to eat and also increase the amount of meat in the recipe without increasing the calories and fat. Also, I found that I had to lengthen the cooking time Giada recommended in order to get the butternut squash really tender. Finally, I substituted oven roasted tomatoes for her sundried tomatoes, again to shave down the fat and calorie content - Chef Meg has a great recipe for oven roasted tomatoes which I make in large batches and keep in a ziploc bag in my freezer for just such an occasion.

(no ratings)
Shrimp Scampi with Spinach and Chive Linguine


This recipe comes courtesy of Sam the Cooking Guy from FitTV. This is an excellent quick summer meal or great for entertaining friends. I especially recommend this with garden fresh tomatoes. I served this with a chipotle marinated chicken skewer and my colorful summer fruit salad.

(no ratings)
Gnocchi with Mushrooms, Sweet Peppers and Zucchini


An excellent hearty and colorful spring dish. This makes an excellent side to some fresh grilled salmon or ahi tuna, or a main entree for a vegetarian meal.


I created this using my favorite cornbread mix, a Trader Joe's brand, which requires the addition of oil, egg and milk. I simply substituted plain nonfat yogurt for the oil, an egg white for the egg, and skim milk for the milk -- and the result is a delicious, dense, fat-free cornbread. Enjoy!


Pair this with a salad to make a quick, easy Italian style meal.


In our travels through the Normandy area of France, we discovered the French style of hard apple cider -- very different from the American version. It's a little sweeter than the American version and comes in dry or semi-dry versions. This recipe was inspired by a fantastic dinner I had in Bayeux, although I've substituted boneless pork chops for the French-style bone-in chops to cut down on the fat. If you can find a French hard cider, give it a try. For this recipe, I used a dry British hard cider that I found at Trader Joe's and it is very similar in taste and texture to those we tasted in Normandy. For drinking purposes, make sure to serve it well chilled first!

You can substitute a pear for the apple for a slightly different, sweeter result. The picture shows this dish served with my roasted green beans and slices of baguette topped with a 1/2 slice of pear and a dot of chevre then toasted.


We're taking our slow cooker to Thailand today with a delicious, vegetarian soup inspired by the tom kha soup found in American Thai restaurants.The combination of spicy red pepper and sweet coconut milk makes for a taste bud treat, while the abundance of vegetables and lean protein from the tofu provide a nutrient-rich and diet-friendly meal.