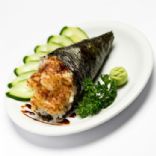 
If you love California Roll Taste, this is an easy variation, arguably much more delicious, and it is guaranteed to be a party sensation in any occasion.


I love Spanish chorizo! It packs a lot of flavor, and it is a bit spicy, which I like. I also use Jalapenos instead of Green pepper (without the seeds) to give the omelette an extra spicy kick. Yum!


Delicious, Hearty Pasta with Bashamel Sauce - Not your diet choice, but a half serving on a Holiday weekend, will bring a big smile to your face :). You can compare this to a Lasagna, or other baked pasta dishes. Great for parties and holiday events!


Great Healthy Breakfast or Lunch, or could act as a perfect Appetizer or Snack


Serving size = a dozen of these delicious Stuffed Grape Leaves

This treat can serve as a party favorite, a delicious appetizer, or would make a perfect interlude to a great dinner.


Konafa is an Egyptian dessert that can be made with different fillings, most commonly cream or nuts filling; sometimes you can find it with cheese filling. (It is the same family as Baklava). If you have a sweet tooth, you have the obligation to try this recipe! You must resist all attempts to have an additional serving though :) Great for parties, always the star of the evening!

(no ratings)
Egyptian Molokhia Soup (half a cup)


Molokhia (Melokiyah, etc.) is a traditional dish in Egypt. Some people believe it originated among Egyptians during the time of the Pharaohs. Others believe that it was first prepared by ancient Jews (the plant is also known as Jew's mallow). The leaves of this plant have a mucilaginous (thickening) quality that helps thicken the soup. The ingredient is rare if at all available in the U.S. fresh but it can be found frozen in Middle Eastern grocery stores. This is a delicious soup that can be your meal starter, a main dish, served with a side of Pita bread, or poured over white rice.

SHERITOFF currently has no rated recipes.