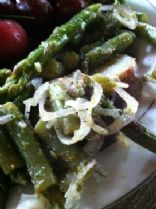 
This is a great salad for picnics because there isn't any protein (mayo) to go bad like there is in most potato salads. It is light, flavorful, and you can substitute lots of different vegetables for the ones listed here.


Quick and easy soup that is great when your garden is overflowing and you don't know what to do with all of the vegetables. Try it with celery, zucchini, or whatever veggies you have on hand.

So low in calories and fat that you can eat as much as you want! Low sodium!


This is a quick and simple traditional bean and ham soup, minus the ham. You can make this soup in 20 minutes and it tastes great!

If you like spice, add some chili powder or tabasco, for a creamier soup, top with a large dollop of vegan sour cream.


Yes, it's true, this soup that tastes like it was made with ham hocks is totally vegan. It seems odd, but as long as you stick with the Goya brand, you are eating vegan! Some of the measurements are wonky because that was how they were programmed in the system, so don't fret if you are a little over or under. Personally, I love to throw a bunch of onions in, but you may prefer something else. Soup is also very good with great northern beans, which is a more traditional bean and ham soup.

If you are in a hurry, use canned great northern beans. Combine all ingredients except beans, simmer for 20 minutes, add canned beans, and simmer for another ten.


This is a tasty, low fat, vegan (vegetarian) soup that is filling but very low in calories. It makes a large batch but it freezes well. We like to spice ours up with a few dashes of tabasco, some chili powder and a bit of soy sauce.

JENNSWIMS currently has no rated recipes.