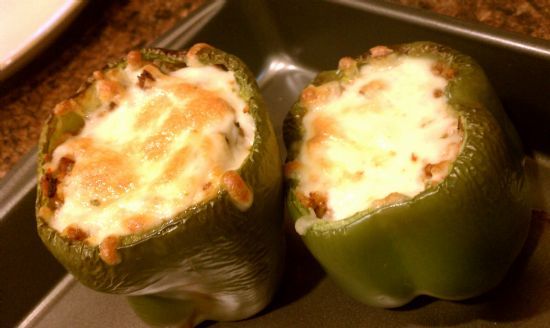 Preheat oven to 375*.
Cut the tops off peppers and remove seeds. Save the tops and coarsely chop them.
Immerse peppers in boiling water for 3 minutes and invert on a paper towel to drain.
Meanwhile in a large skillet, cook onion, pepper tops, and turkey until browned. Drain off any excess fat.
Stir in tomatoes, water, rice, Worcestershire sauce, basil, salt and pepper.
Bring to a boil, then reduce heat and cover. Simmer 15 minutes or until rice is tender.
Stir in 1/4 cup cheese.
Fill peppers with turkey mixture and place in baking dish. Arrange extra turkey mixture around peppers.
Bake 15 minutes.
Sprinkle with remaining 1/4 cup of cheese and let stand until cheese is melted.