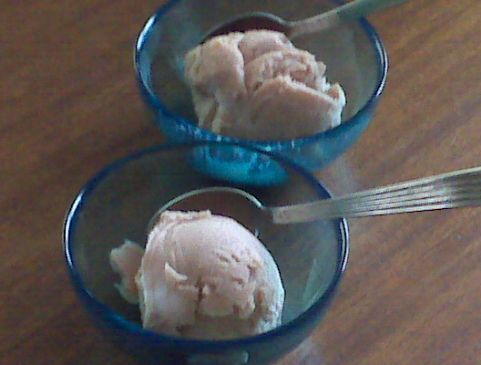 Chop rhubarb stalks as finely as possible, to avoid strings in the finished gelato (I slice mine in a food processor). Put the chopped rhubarb and sugar in a pot over medium heat, and cook until the rhubarb is tender and looses all shape - you should have a rhubarb slurry. Refrigerate to cool.
Whip the egg yolks in a bowl until they are light yellow in colour. In a separate saucepan, heat milk to almost boiling. Pour the hot milk slowly into the egg yolks, while continuing to whip the mixture. Return this mixture to the saucepan, and heat over low heat, stirring continuously, until the mixture thickens into a custard (should coat a wooden spoon without running off). Refrigerate to cool.
Once both components are cool to fridge temp (many hours / overnight), combine both in a blender or food processor to mix them thoroughly and eliminate any remaining fibres in the rhubarb. If desired, add a few drops of red food colouring (without it, the gelato will be a greenish-beige colour vs. the pink shown in the photo, depending on the level of red pigment in your rhubarb's skin).
Transfer to an ice cream maker and freeze according to your appliance's directions.
Makes 12 - 1/2 cup servings.