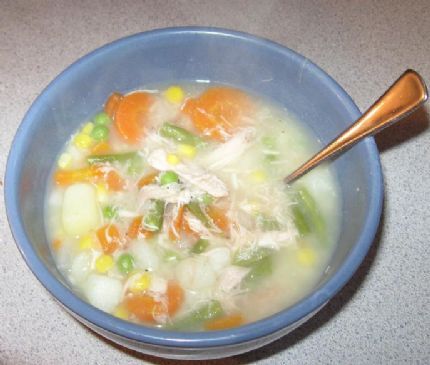 8 quarts of water
5 chicken bouillon cubes
1 whole chicken (skin and bone removed after boiling) or whatever chicken you want to use
5 pounds of peeled and diced potatoes
2 large onions, diced
2 pounds of frozen mixed veggies (about 12 cups)
1 pound of frozen carrots (about 3 cups)

salt and pepper (to taste)

**note: Most of the "prep time" is just boiling chicken and cutting potatoes. After that part, it's all boil and stir.

Boil chicken until falling off the bone (if using a whole chicken like I did, remove as much skin and fat before boiling), remove from heat, allow to cool so chicken can be de-boned and hand shredded. To "hand shred", just break up the chicken into bite size pieces, that's all! :) For this batch I made, the chicken ended up weighing 1.8 pounds. And was plenty for 6 people with oodles of leftovers! :)

Peel and dice the potatoes, put into the water with the bouillon cubes along with the chicken, add the veggies, and allow to boil until potatoes are soft, then serve! :)

**variation: my mom likes to put the veggies and things into the "chicken water" (after boiling), but the boiling process takes off the fat and I can't add my veggies to water with fat in it on purpose, though I'm sure the soup would have a different flavor if you do that.. just an option**

Add salt and/or pepper to taste. I like more pepper than others and it gives the veggies a yummy kick :)

SIMPLE recipe, SO yummy, and bunches of leftovers for the family! :)