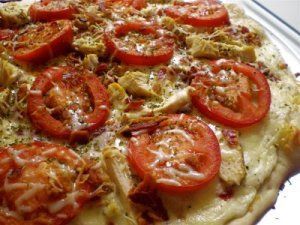 Minutes to Prepare: 10
Minutes to Cook: 20
Number of Servings: 8

Preheat oven to 425 degrees. Precook chicken and cut into small pieces or use canned chicken. Place crust on pizza pan. Spread ranch dressing on crust as thick or thin as preferred. Apply one full layer of sliced tomatoes and equally distribute chicken pieces over crust. First, sprinkle a solid layer of mozarella cheese and then lightly dust with some cheddar. Sprinkle with Italian seasoning, and bake in oven for 12-20 minutes until cheese is golden brown.

Additional toppings I have found to go well with this type of pizza are mushrooms, black olives, onions and when I'm really pushing the veggies, canned asparagus and/or tiny, chopped pieces of fresh broccoli. Bacon also makes a great compliment to chicken and ranch dishes.