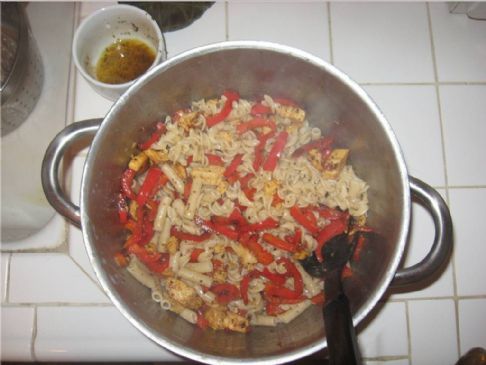 Minutes to Prepare: 10
Minutes to Cook: 20
Number of Servings: 2

Start by boiling some water for a short pasta. Tubular pasta with ridges (rigatoni, penne) work best to hold the oil. My rule is to buy two 1 lb packages and use 2/3 of a package at a time (so three two-person servings with two packages). These proportions work well with two bell peppers. [Note - here I am using Trader Joes brown rice pasta/rigatoni.]

While water for pasta is boiling, start making the olio sauce. I use one part cracked black pepper to two parts Italian Seasoning (Morton and Bassett brand is way better, it has paprika in it which gives it a unique flavor and color), and two parts Janes Original Mixed-up Salt. This salt mixture contains tons of dehydrated onion and garlic, which dissolves into the olive oil. Once you put these spices into a small custard dish, pour in olive oil to until the spices have enough room to swirl around (this is all by look without measuring).

Slice up two red bell peppers into 2-inch medium-thin strips. Pile the peppers in a saute pan. Cast iron gives the best kind of heat - hot and even - and best achieves the charred effect.

Drizzle enough of the olio mixture over the top of the peppers to coat them all without leaving any to pool in the bottom (usually two or three spoonfuls). Reserve the rest of the olio for coating the pasta.

The first step in getting the peppers right is to start by covering them to steam them. Just when they start to release some of their liquid, take the lid off and turn the heat on high. After you turn up the heat, the liquid will cook off. Continue to stir until there is no extra liquid in the pan and then leave the peppers alone to char. There is no specific time frame until they get blackened around the edges, but when you stir you'll see the charring effect. Let the bottom of the peppers char two or three times, to your taste. I like to leave them still crunchy from steaming, but charred just enough to give them that carbon flavor.

Add the chicken/substitute to the peppers toward the very end, after the water has started to cook off.*

* NOTE - The "classic" version of this recipe used 4-5 chicken tenderloins ("cutlets"). I would use frozen bags of tenderloins and thaw them in lukewarm water for 20 minutes, then put them under the broiler for 5-7 minutes. I'd use the edge of a knife to shred them. However, lately I've been using either Morningstar Chicken Strips or Trader Joe's imitation chicken instead.

Drain the pasta when it's done and drizzle the rest of the olio mixture on it one spoonful at a time, stirring after each spoonful to make sure the oil goes on evenly. Add the pepper mixture to the pasta, stir together and serve with parmesan cheese.