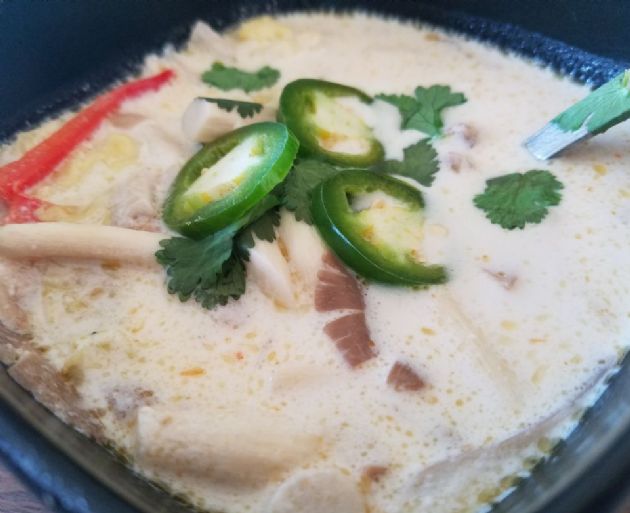 Minutes to Prepare: 10
Minutes to Cook: 20
Number of Servings: 8

For this recipe, I could not find kaffir lime leaves, but if you can find them, add them with the chicken broth and remove while eating as you do with the ginger and lemongrass. As a substitute for the lime leaves, I left the squeezed lime halves in the soup while cooking, careful not to spoon them out into the serving bowls.

If you do not like to leave these items in while eating, please look into other methods/recipes, such as an infuser. I have never cooked this soup without leaving them in, so I would not know how to do so.

Reduce heat and let simmer until chicken is almost cooked and veggies are starting to soften.

Stir in mushrooms, red curry paste, and coconut milk. Do not let liquid return to a boil or the coconut milk will become too frothy vs. creamy.

Continue to cook, stirring often, until mushrooms and all ingredients are now cooked through.

Serve with cilantro and sliced jalapeno for garnish. For this version of the recipe, leave ginger root & lemongrass in the soup to continue flavoring until finished (even as leftovers). Remove from served portions while eating, such as you would remove shells from a seafood dish.