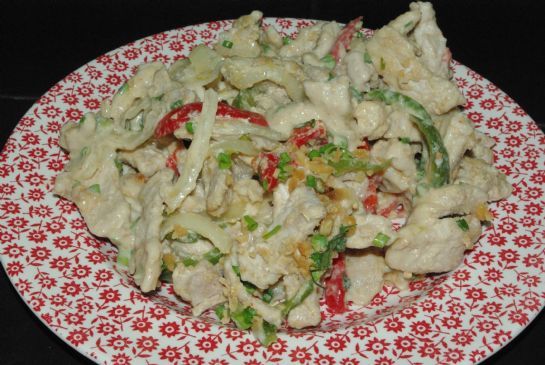 Minutes to Prepare: 15
Minutes to Cook: 15
Number of Servings: 6

Thinly slice your pork chops and put aside.
Combine the flour, cumin, cayenne pepper and 1/2 tsp of salt. Stir to evenly distribute the spices.
Put the mixture into a plastic zip lock bag, and put the meat in the bag and toss to coat.
Heat the oil in a large skillet over medium-high heat. Cook until nearly cooked through. Toss in the onion and bell pepper.
While the pork is cooking, stir together the chicken broth, coconut milk, peanut butter, honey, ginger and 1/4 tsp. of salt. cook, stirring constantly , or until thickened.
Place the cooked pork and vegetables on a platter and pour the peanut sauce over the mixture. garnish with the chopped green onion, cilantro and chopped peanuts.