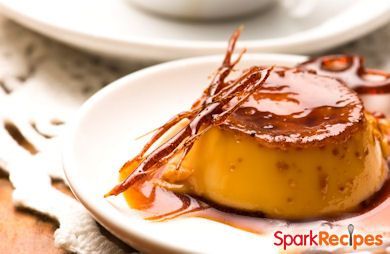 Preheat oven to 350°F.
Stir together sugar, cinnamon, cloves, cayenne and salt in a large bowl.
Whisk in pumpkin, milk, orange juice and egg substitute; divide among eight 6-ounce custard cups.
Set custard cups in a high-rimmed roasting pan and pour boiling water around them to a depth of 1 inch.
Bake until firm around edges and slightly puffed, about 45 minutes.
Remove cups from water (careful not to burn yourself), cool completely, cover and refrigerate.
Before serving, top each cup with a tablespoon of whipped topping and an orange wedge.