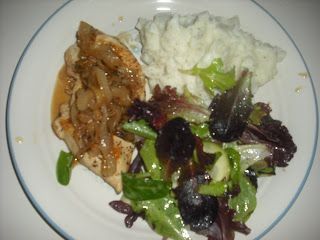 1. Cut the potatoes in half and place in a pot of warm water; Cover and bring the water to a rolling boil. Salt the water and potatoes. Remove the lid and continue boiling until tender, 10 to 12 minutes.

2. Preheat a large skillet over medium-high heat. Add 2 tsp of olive oil. Season the chicken w salt & pepper and add to the skillet. Brown chicken on both sides, about 3 minutes per side.

3. Remove the chicken and set aside, covered with foil. Add 2 tsp oil, onions, thyme, honey and garlic. Season the onions with salt & pepper and cook, stirring frequently for 7 to 8 minutes or until caramelized.

5. Turn heat to high and bring the liquids to a simmer. Return chicken to the skillet. Cook the chicken in the sauce for about 10 minutes, flipping chicken over halfway through the cooking time.

6. Drain potatoes and return to the pot. Add half-and-half and butter to the potatoes and smash with a fork or potato masher to the desired consistency. Season potatoes with salt & pepper. Cover and set aside to maintain temperature.

8. Toss the watercress and sliced cucumbers with the dressing.