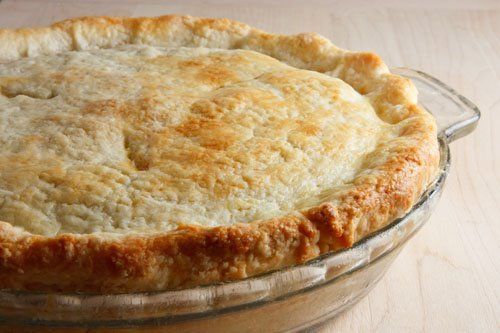 Melt the butter in a large pot over medium heat. Add the olive oil, onions, leek and fennel and saute until translucent, 10 to 15 minutes. Add the flour, reduce the heat to low, and cook for 3 more minutes, stirring occasionally. Slowly add the stock, saffron, salt, and pepper, and bring to a boil. Simmer for 5 more minutes, stirring occasionally. Add the milk and season to taste. The sauce should be highly seasoned.

Cook the potatoes in boiling salted water for 10 minutes. Lift out with a sieve. Add the asparagus, carrots, and squash to the pot and cook in the boiling water for 5 minutes. Drain well. Add the potatoes, mixed vegetables, onions, and parsley to the sauce and mix well.

Serves 16. If only 8 servings are desired, cover second pie and freeze. Thaw completely before cooking.