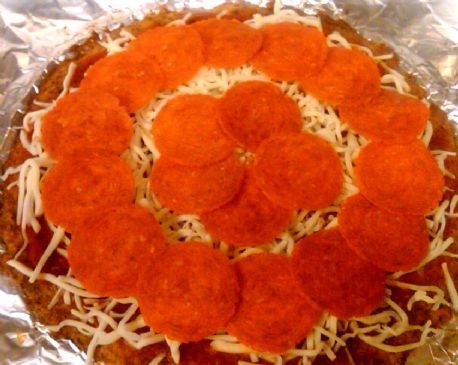 Minutes to Prepare: 10
Minutes to Cook: 20
Number of Servings: 2

You have two options for the crust. The original recipe says to simply stir together the cauliflower, cheeses, and egg. But I prefer a smoother texture so I put those ingredients in the food processor and blend until smooth.

Next dump your "dough" onto a prepared baking sheet. Personally I don't have a pizza pan so I line a large paper plate with nonstick foil, use the plate to form my round crust and then lift the foil and crust and place on my baking sheet. It's the best way I've found to get a nice round crust. You can also just eyeball it and form it by hand. The goal is to have an evenly spread crust that's pizza shaped.

Bake the crust in the middle of you oven for 12-15 minutes. The crust should be golden around the edge and a little crispy on the bottom.

Remove from oven. Top however you'd like. I calculated the nutritional values based on the measurements and ingredients above. Make sure to account for additional carbs if you add things like onion, peppers, more cheese or sauce, etc. Spread 2 tbsp of pizza sauce evenly over the crust. Top with your choice of cheese (I love either provolone or and Italian blend). Lastly cover with thinly slice pepperoni.

Return to oven and continue to bake for 5-7 minutes at the same temperature. Some similar recipes recommend using the broiler at this stage, I have not tried this though.

Remove from oven, cut into 1/4's and eat. Try to share half with a friend. I like to use a paper towel to absorb some of the pepperoni grease before slicing.