Orzo with Sausage and Peppers 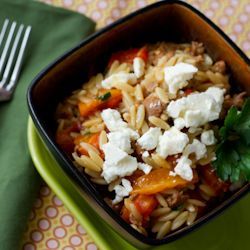 Preheat broiler. Place peppers skin side up on a baking sheet, drizzle with olive oil and season with salt and pepper. Broil until skins are black and charred, about 10 minutes. Remove from broiler, place peppers in bowl and cover with lid or plastic wrap and allow to steam for 15 minutes.

Meanwhile, heat broth and stock in a large stock pot to a boil. Add orzo and cook, stirring frequently, until the orzo has absorbed almost all the cooking liquid and is thick.

While pasta cooks, heat 1 tsp. olive oil in a large dutch oven over medium-low heat. Brown sausage until cooked through (remove from casings if needed). While browning, peel skins from roasted peppers and chop. Add garlic, tomatoes red pepper flakes and peppers to sausage. Cook for 2-3 minutes. Remove from heat and stir in orzo and parsley. Top each bowl with a sprinkle of feta.