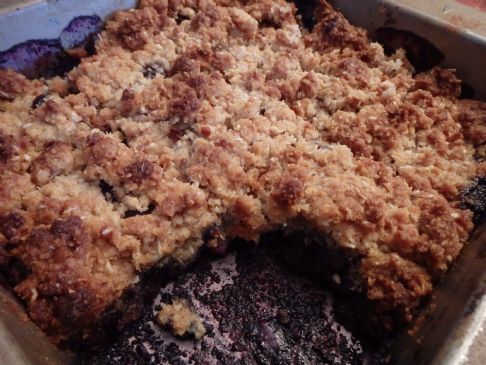 Preheat oven to 350F.
Rinse blueberries well, then place them in the 2-quart baking dish. Sprinkle cinnamon on top.
Mix almond flour with sea salt and baking soda in a large bowl, until well mixed. Stir in the unsweetened shredded coconut and walnuts.
Melt the coconut oil, in a small pan over low heat, then add the honey to just barely melt the honey enough to mix it in.
Stir the melted mixture into the almond flour mixture until well-blended, then crumble the almond flour mixture over the berries.
Bake for about 30 minutes until topping is golden brown.
Cut into squares to serve!