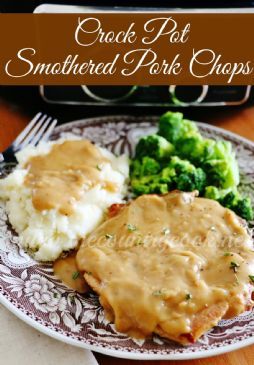 There are a detailed set of instructions located here: http://www.thecountrycook.net/2011/01/slow-cooker-pork-chops.html#Lb3idxqo9ThiqwEo.32

In a 5-6 quart slow cooker, combine onion soup mix, chicken broth, cream of chicken soup and pork gravy mix. Whisk together until combined. Don't worry about any lumps, they will go away during cooking. Note: I find this works better in an oval slow cooker instead of a round one.

Season both sides of the chops with a little bit of garlic powder.
Place pork chops into the slow cooker. Do your best to spread them out and cover with the gravy mixture. Cover and cook on low about 6-8 hours.

After cooking you can serve right away with the gravy that the chops cook in or you can thicken the gravy up some. In a medium pot, over medium heat, melt 2 tablespoons butter (don't walk away while doing this, butter can melt and then burn quickly.) Then whisk in 3 heaping tablespoons of all-purpose flour. Continue whisking until it forms a thick paste.

After it forms a thick paste, and you've whisked it until smooth, pour in 2 cups of the pork gravy. What I will do is carefully remove the pork chops from the slow cooker using a spatula so they don't fall apart while taking them out and put on a plate. This will make it easier to pour the gravy into a measuring cup.

Whisk mixture constantly for another minute. Mixture will begin to thicken very quickly. Once it has thickened, remove from heat. Then combined thickened gravy with any remaining gravy in the pot. Stir well. Serve gravy over pork chops and on some mashed potatoes!