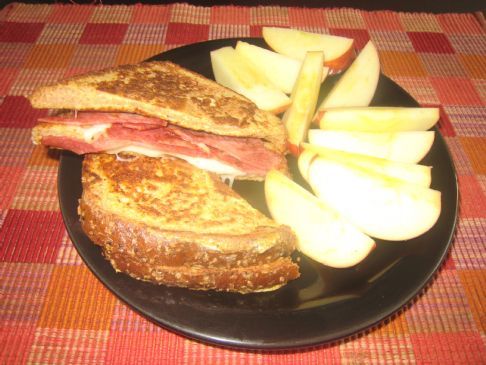 Minutes to Prepare: 5
Minutes to Cook: 10
Number of Servings: 1

Cook turkey bacon according to package directions. I like to cook them in the skillet where I will be cooking the french toast that way I don't use any additional oil.

Meanwhile, whisk egg and dip bread slices into egg, soaking both sides. Place soaked bread in skillet and cook until golden brown (3 minutes per side).

Put cheese and bacon between toast slices and place back in skillet until cheese is slightly melted.

Serve with apple slices or whatever fruit or veggie you desire.

Add veggies instead of bacon for even healthier sandwich.