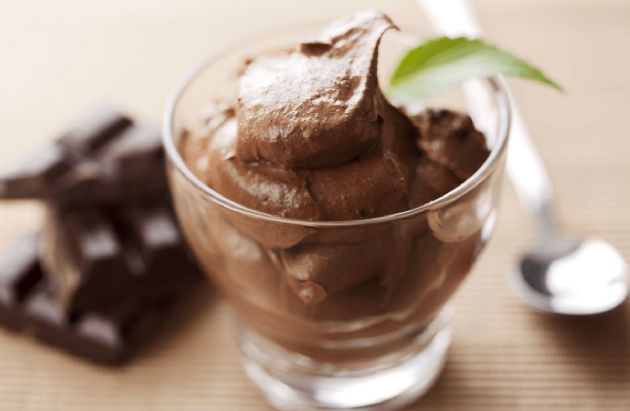 Minutes to Prepare: 35
Minutes to Cook: 10
Number of Servings: 6

Chocolate mousse can have 380 calories and 14 grams of fat. This version has less than half the calories and a third the fat!

Before whipping your egg whites, sprinkle a bit of white vinegar on a clean, damp cloth, and wipe out your bowl. This will remove any oily residue, which will prevent the egg whites from whipping properly.

Combine the yogurt, cocoa powder, and vanilla extract in a large glass bowl. Microwave for one minute, stirring halfway through. Remove and stir in the melted chocolate.

Add the sugar and two tablespoons of water to a small saucepan set over medium heat. Once the sugar is dissolved, increase the heat to high and boil for one minute. Remove from heat and set aside.

Place the egg whites in a mixing bowl. Using a mixer, whip until soft peaks form.

With the mixer running, add the sugar water to the egg whites in a slow and steady stream. Continue to beat until mixture is cool and stiffer peaks form.

To avoid ending up with scrambled egg whites, you'll need to temper them: Add one large tablespoon of egg mixture to chocolate yogurt mixture, and stir to combine. Fold in the remaining egg mixture using light strokes so as not deflate the egg whites. Loosely cover and chill for 30 minutes.

Divide the fruit (optional) among six wine glasses, then top with 1/2 cup of mousse.