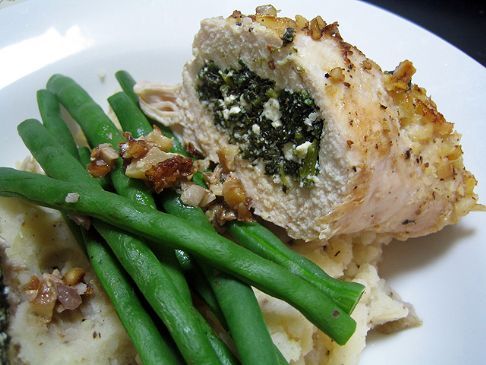 Finely chop the spinach. In a medium bowl, combine the spinach and feta and season lightly with salt and pepper.

Put the chicken breasts between two pieces of plastic wrap and pound them until they're an even half-inch thickness. Season them on both sides with salt and pepper. Spread one quarter of the spinach-feta filling evenly over each chicken breast. Roll each breast up, pressing the filling in from the sides so it doesn't fall out. Seal them closed with a few toothpicks.

Put the chopped nuts onto a plate. Whisk the egg white in a small bowl until smooth. Dip each chicken breast in the egg white, rolling to coat evenly. Then, roll each breast in the nut mixture, pressing them into the chicken so they form a coating.

Heat the olive oil in a nonstick saute pan over medium-high heat. When it's hot and shimmering, add the chicken breasts and leave them alone to brown. Carefully turn them with tongs, moving them gently back and forth so the walnut coating doesn't stick.

When all sides are brown, put the chicken in the oven. Cook until the chicken is just cooked through and the filling is hot, 20-30 minutes. Let the chicken cool some, then remove the toothpicks.