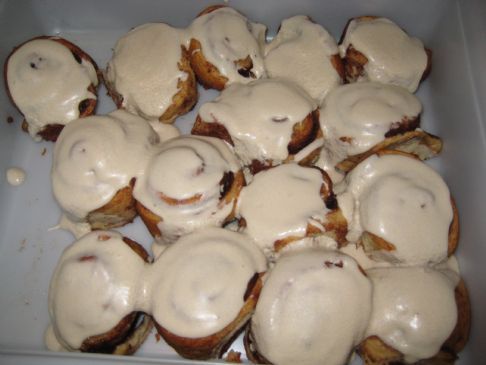 Here are the verbatim directions from VegNews:

1. In a small bowl, mix the yeast, 2 teaspoons sugar, and water. Let the mixture sit until the yeast is bubbly. While the yeast is getting started, heat the non-dairy milk and 2 tablespoons margarine until warm, then remove from heat.

2. In a large bowl, mix the flours, gluten, and salt. Add the yeast and milk mixtures to the flour mixture. With a wooden spoon, blend until it begins to hold together.

3. On a floured surface, turn out the dough and knead until smooth and elastic, about 10 minutes. Form into a ball, place in a lightly-greased large bowl, cover, and let rise until doubled in size, about 2 hours. Punch the dough down and let rest for 10 minutes. Roll into a rectangle shape about 12-x-6 inches.

4. In a small bowl, mix the 1/2 cup sugar, cinnamon, and nutmeg. Melt 2 tablespoons margarine and lightly spread over the dough, then sprinkle on the sugar mixture. Tightly roll up the dough along the longer side, moistening the final edge with water and sealing. Cut into 1-inch slices and place evenly apart on a lightly-greased 9-x-13-inch pan.

5. Cover pan with a dish towel and let rolls rise until they are almost touching each other, about 45 minutes. Preheat oven to 350 degrees. Melt remaining 1 tablespoon margarine and light brush rolls, then bake for 30 minutes or until golden brown.

6. For the icing, beat the powdered sugar, margarine, and vanilla with an electric mixer until the margarine is distributed into the sugar (the mixture should be crumbly). Slowly drizzle in the non-dairy milk and beat until the icing is smooth, about 2 minutes. After the rolls have cooled slightly, slather on icing and serve.

Makes 16 to 18 rolls. Sunny's Hint: Cut the rolls from the long rolled dough by circling with a thread and pulling. Easy!