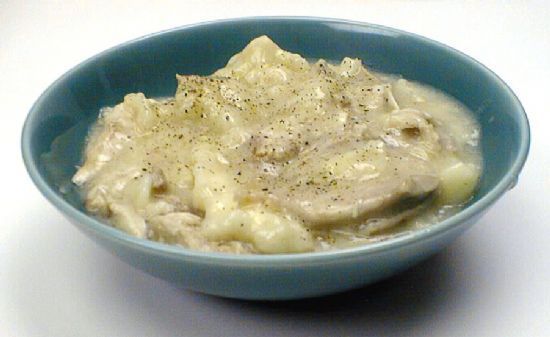 Put the chicken in a small pot and cover with just enough water to cover (about 2 cups). Remove from water (now broth) and allow to cool. Chop into small pieces.

NOTE: When I make the chicken the night before, I put the broth in the refrigerator in a separate container. That way, the fat can easily be removed from the top of the broth before further preparation.

In a small bowl, with a fork, beat together 1 cup water, egg, salt, and 2 cups flour until stiff, but sticky, dough forms. On dough board, heap one cup of flour. Set dough in the middle of flour and flip so that all sides are coated with flour. Begin rolling out the dough, sprinkling the surface with flour to keep the rolling pin from sticking. About 1/2 cup flour (included in the calorie count) will eventually be incorporated in the dough, or be dusted on the surface. Roll out as thinly as possible. Cut dough with table knife into 1" x 1" pieces.

In a Dutch oven or large pot, bring the reserved broth and the Swanson's broth, along with 2 cups water, to a boil. Drop in the dumplings little by little, stirring occasionally, until all are added. Cover and simmer 4 to 5 minutes. Add chicken, salt, pepper, and milk. Let set for a few minutes before serving.