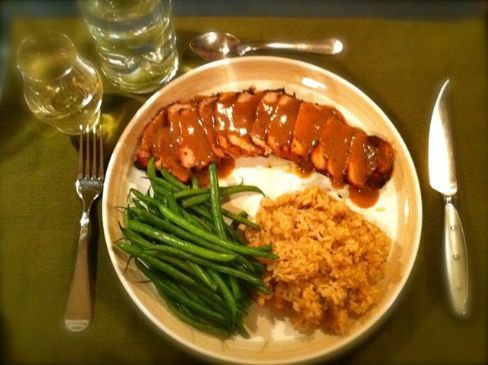 Minutes to Prepare: 5
Minutes to Cook: 60
Number of Servings: 4

To make the marinade, in a bowl, combine the apple cider, brandy, brown sugar, mustard, oil, 1 teaspoon of salt, 1/2 teaspoon of the pepper, the cinnamon, allspice, and cayenne and whisk well to combine and dissolve the sugar.

Place the chops in a large re-sealable plastic bag and add the marinade. Seal and place in a large baking dish. Let marinate in the refrigerator for 8 hours or overnight, turning occasionally.

Remove the pork from the marinade and pat dry, saving the marinade, and season on all sides with the Essence and the remaining 1/2 teaspoon salt, and 1/4 teaspoon black pepper.

Grill the pork with the grill lid closed, turning several times, until an instant-read thermometer registers an internal temperature of 145 degrees F when inserted into the thickest portion of the meat (about 45 minutes, depending on the thickness of the meat).

While pork is grilling, melt 1 tbsp butter in small saucepan. Whisk in 1 tbsp flour and continue whisking until light brown. Add left-over marinade. Bring to boil and let simmer for 5 minutes or until gravy thick.

Remove the pork from the grill, cover loosely with aluminum foil, and let rest for 10 minutes before serving/slicing. Top with gravy/sauce.