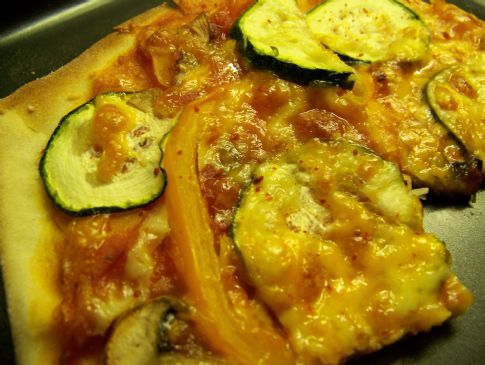 Minutes to Prepare: 75
Minutes to Cook: 20
Number of Servings: 4

For pizza dough:
Activate yeast by following directions on packet, using honey in place of the sugar. When yeast is ready, pour into a mixing bowl with about a cup of flour and stir. Keep adding flour as needed until a dough forms. Sprinkle flour onto surface and turn out dough. Knead dough until far less sticky, roll into a ball, and dust with flour. Grease a separate mixing bowl with the olive oil. Place dough ball into mixing bowl, cover, and place in a warm, dark location for about an hour. Dough will rise, and is ready to work with after this time. (Will yield about 2 thin-crust medium pizzas)

To Make Pizza:
Preheat oven to 350-degrees. Turn out ball of dough onto floured work surface, and halve the amount. With one half, form dough with hands or rolling pin into flat pizza shape, ensuring pizza will fit onto baking sheet. Spread on about 1/2 cup pasta sauce, toppings, and cheese. Repeat with second pizza. Bake in oven at about 350-degrees for 15-20 minutes (cook for less time at a higher temp for a crispier crust). Crust will turn golden brown and center will be warm when pizzas are finished. Remove from oven and let stand for a few minutes before slicing.

Tip: Recipe makes a fantastic calzone as well. After rolling out each pizza crust, place toppings only (no sauce) on 1/2 of the pizza only, and fold over other half of dough, making a half-moon shape. Crimp the edges of the crust by twisting small sections upward and pressing down (like empanadas). Same baking instructions, but you may want to put olive oil on the top of the calzone to avoid burning in the oven. I like to use the pasta sauce as a dipping sauce.