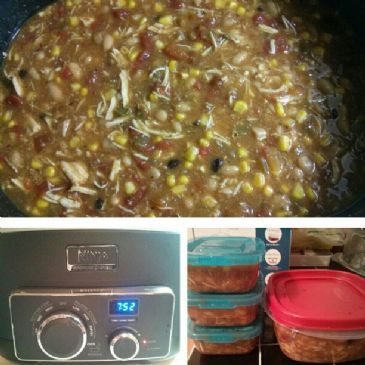 The recipe doesn't need much water, and I find it better to sort of rinse the cans and seasoning packets into the pot rather than lose the flavors from the sediments and to water down what is there by using plain old water.

Use tongs to further break up chicken chunks and stir them into the chili before serving for a hearty but even consistency.

I use the Ninja cooking system which has a timer and keep warm function now, but my older crockpots would just simmer for 8, 10, 12 hours or however long it took me to turn the pot off, and everything came out just as lonely.

The night before:
1. Clean dried beans and arrange in even layer in crock pot. Add water to cover, plus an inch more, and let sit overnight. The beans will absorb most of the water, but should still be fully covered.
2. If chicken breasts are frozen, move to refrigerator.

The next morning:
1. Slice partially-frozen chicken breasts (they're really easy to handle) into 8 pieces. Half them, then half each piece & half once more. Spread out atop beans in pot.
2. Sprinkle both seasoning packets over the chicken and beans. (Run a trickle of water inside packets to get it all out.)
3. Pour can of white beans evenly into pot. (Swish a bit of water - about half a can - inside can to get all that good flavoring out)
4. Break up frozen veggies and pour evenly into pot.
5. Pour can of diced tomatoes evenly into pot. (Again, rinse the can a little and pour it into the pot)

At this point, the water should be enough. It won't be covered, but you will be able to see it a little.

Set the crock on low for eight hours. Try to ignore the smell. You will want to eat it after about an hour, but I don't think it's safe to eat the chicken just yet.