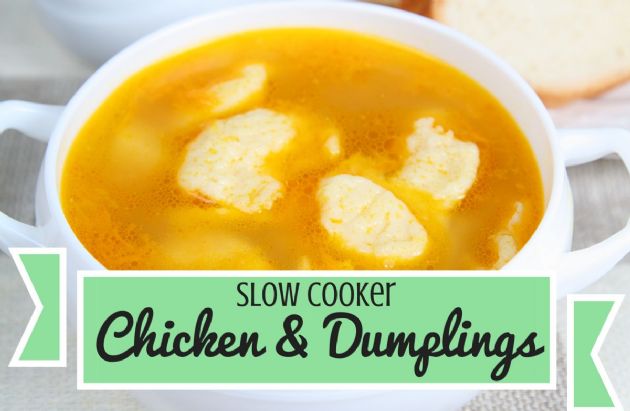 Add 1 cup frozen peas in the last five minutes of cooking for some extra veggies and added color.

Place a large saute pan over medium heat. Add the oil to the warm pan, then add the chicken.

Sprinkle on the poultry seasoning and pepper and cook until the chicken is lightly browned, about five minutes.

Transfer the chicken to a slow cooker insert, then return the pan to the heat and add the onion. Cook for two to three minutes, stirring occasionally. Add a tablespoon of stock to the pan if the onions start to stick or brown too much.

Add celery and carrots to the pan, and cook another two minutes. Sprinkle the flour over the vegetables. Cook for two more minutes, stirring often.

Slowly pour in the stock, stirring until it's all incorporated. Bring to a boil then reduce to a simmer.

After simmering for one minute, transfer the mixture to the slow cooker.

Cover and cook on low for five to seven hours.

About 15 minutes before you're ready to eat, combine the dry ingredients for the dumplings in a small mixing bowl. Stir in the milk with a fork.

Remove the lid of the slow cooker and drop the dumpling mix on top one tablespoon at a time.

Cover the slow cooker with a cotton towel, then replace the lid. Steam the dumplings for 15 minutes, then serve immediately.

Serving Size: Makes one cup of stew with one dumpling per serving.