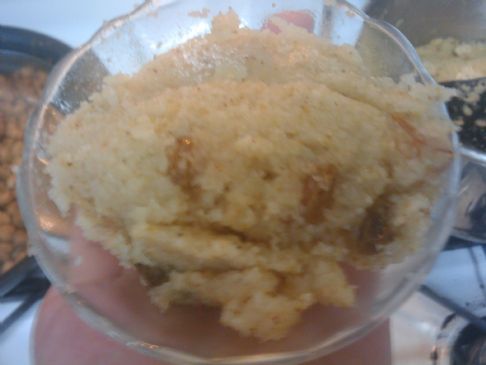 Minutes to Prepare: 5
Minutes to Cook: 15
Number of Servings: 10

First prep by slicing a half cup of whole almonds and measuring out one cup of cream-of-wheat, sugar, and three cups of water to boil.

Start with 1/4 cup of olive oil in a cooking pan. Let it warm up. Then add the cream of wheat and stir. Make sure to keep stirring and not let it burn. Keep stirring the cream-of-wheat into the oil until it turns brown. If you let it stick to the sides too long, it will burn, so keep stirring and keep the cream-of-wheat moving. After it turns brown, add the sugar, almonds, and raisins and stir them in. (Optionally, you can add grounded cinnamon to give it a cinnamon flavor.)

Then add the water. Be careful because for a couple of seconds the mixture will be bubbling up. It will calm down soon though. Then stir for about 2 minutes and let sit and cool. As the sooji halwa is cooling down it will thicken.

It can be served hot or cold. Generally in India it is served hot though.