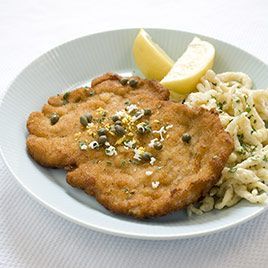 WHY THIS RECIPE WORKS: While classic Wiener schnitzel features a thin, tender veal cutlet coated in ultrafine bread crumbs and then fried until puffy and golden brown, many recipesto avoid the toughness and high price of vealsubstitute pork. But too often these recipes yield dry, tough pork cutlets with greasy coatings. We wanted tender pork cutlets with the crisp, wrinkled, puffy coating that is Wiener schnitzels signature.

Dismissing pork chops and prepackaged cutlets, we chose tenderloin, which has a mild flavor similar to veal and isnt tough. We cut the tenderloin crosswise on an angle into four pieces, which when pounded thin gave us long, narrow cutlets that would fit two at a time in the pan. Schnitzel is breaded with the usual flour, egg, and bread-crumb sequence of coatings, but we had to figure out how to get the characteristic puffiness and rumpled appearance of the finished cutlets; with good schnitzel you should be able to slide a knife between the meat and the coating. Drying bread in the microwave produced extra-dry crumbs that helped with the crispness, and a little vegetable oil whisked into the egg helped separate the coating from the meat. ?But the real breakthrough was in the frying method: Instead of sautéing the cutlets, we cooked them in a Dutch oven in oil, shaking the pot to get some of the oil over the top of the meat. The extra heat quickly solidified the egg in the coating, so that the steam from the meat couldnt escape and puffed the coating instead. With the traditional schnitzel garnishes of lemon, parsley, capers, and a sieved hard-cooked egg, these cutlets, with their tender meat and crisp coating, delivered on all fronts.

1. Place bread cubes on large microwave-safe plate. Microwave on high power for 4 minutes, stirring well halfway through cooking time. Microwave on medium power until bread is dry and few pieces start to lightly brown, 3 to 5 minutes longer, stirring every minute. Process dry bread in food processor to very fine crumbs, about 45 seconds. Transfer bread crumbs to shallow dish (you should have about 11/4 cups crumbs). Spread flour in second shallow dish. Beat eggs with 1 tablespoon oil in third shallow dish.
2. Place pork, with 1 cut-side down, between 2 sheets of parchment paper or plastic wrap and pound to even thickness between 1/8 and 1/4 inch. Season cutlets with salt and pepper. Working with 1 cutlet at a time, dredge cutlets thoroughly in flour, shaking off excess, then coat with egg mixture, allowing excess to drip back into dish to ensure very thin coating, and coat evenly with bread crumbs, pressing on crumbs to adhere. Place breaded cutlets in single layer on wire rack set over baking sheet; let coating dry 5 minutes.
3. Heat remaining 2 tablespoons oil in large Dutch oven over medium-high heat until it registers 375 degrees on instant-read thermometer. Lay 2 cutlets, without overlapping, in pan and cook, shaking pan continuously and gently, until cutlets are wrinkled and light golden brown on both sides, 1 to 2 minutes per side. Transfer cutlets to paper towel-lined plate and flip cutlets several times to blot excess oil. Repeat with remaining cutlets. Add more oil if needed.