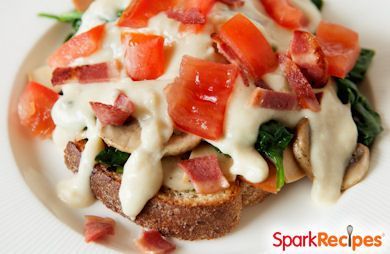 Minutes to Prepare: 5
Minutes to Cook: 25
Number of Servings: 4

I grew up in the South and this was a favorite dish of my family. Thin slices of salty country ham, next to thin slices of turkey all covered with a thick cheese sauce then topped with bacon and served on toast. One serving is more than 2,000 calories! This version is much lighter.

Preheat the oven to 350 degrees Fahrenheit.

Melt the butter in a medium sauce pan, then add the flour and cook, stirring constantly, for one minute. Slowly whisk in the milk, and turn the heat to medium-high. Bring to a boil, then reduce heat to medium and simmer for five minutes, until the sauce has thickened. Stir in the mustard, pepper and cheese and remove from heat.

Cook the bacon in a large saute pan, then remove from pan, chop, and set aside. Cook the mushrooms in the same pan for two minutes, then add the spinach and cook another two minutes.
Coat an 8 X 10 inch baking dish with cooking spray. Place the toast in the dish in a single layer, then layer on the turkey and ham, and spinach and mushroom mixture. Pour on the cheese sauce, then sprinkle on the tomatoes and bacon. Bake for 15 minutes or until the sauce starts to bubble.