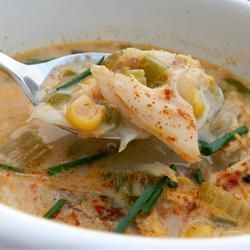 This recipe was tweaked it, of course. The original was not a slow cooker recipe plus fresh crabmeat. I used canned crabmeat and it was not tasty chowder. Therefore, I change the crabmeat to back to fresh.

1. Melt butter in a skillet over medium heat; stir in onion, pepper, celery, one diced potato, and a pinch of salt. Cook until onions are soft and translucent, 7 to 10 minutes.
2. Stir seafood seasoning and cayenne pepper into onion mixture; cook for 30 seconds.
3. Transfer to a slow cooker. Pour 2½ cups water and 1 cup frozen sweet corn kernels into the slow cooker.
4. Place 1 cup water, 1 cup frozen sweet corn kernels, and garlic into a Magic Bullet cup and puree until smooth. Add to the slow cooker.
5. Place the other diced potato with ¼ cup water in the Magic Bullet and purée until smooth then add the potato water to the slow cooker.
6. Cover and cook the chowder for six hours.
7. Remove the lid; add the crabmeat, paprika, and heavy cream to chowder. Season with salt and pepper to taste, cover and cook for about 30 minutes or until heated through.
8. Garnish with green onions and a dash or two of cayenne pepper.