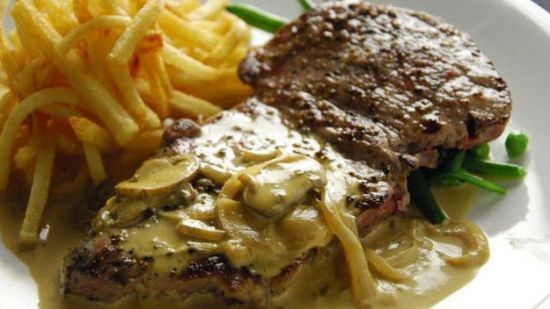 http://en.wikipedia.org/wiki/Steak_Diane
"Steak Diane" does not appear in the classics of French cuisine, and was probably invented in mid-20th century New York as part of the fad for tableside-flambéed dishes. The name 'Diane', the Roman goddess of the hunt, has been used for various game-related foods, but the "Venison Steak Diane" attested in 1914, although it is sautéed and flambéed, is sauced and garnished with fruits, unlike later steak Diane recipes, so it is unclear if there is a connection. By the 1940s, Steak Diane was a common item on the menus of restaurants popular with Café society, including the restaurants at the Drake and Sherry-Netherland hotels and The Colony. It is often attributed to Chef Beniamino Schiavon 'Nino of the Drake'.

1. Place the steaks between two sheets of plastic wrap; pound with a kitchen mallet to tenderize.
2. Add the EVOO and melt the butter in a skillet over medium-high heat, and heat until it begins to smoke. Cook the steaks for 1 to 2 minutes on each side until they have browned. Pour brandy over steaks and carefully ignite.
3. Once the flames burn off, remove steaks from the pan and set aside.
4. Cook the onion and garlic in the same skillet over medium heat until they soften. Stir in the red wine, Worcestershire sauce, salt, and pepper; mix well.
5. Mix in the mushrooms, stir, and cook for about 5 minutes.
6. Meanwhile, coat one side of each of the steaks with 1 ½ teaspoons of the Dijon mustard.
7. Gently lay them on top of the sauce in the skillet, mustard-side down. Spread 1 ½ teaspoons mustard on top of the steaks. Cook 2 to 3 minutes per side. Remove the steaks from the sauce, and keep warm.
8. Stir the cream in to the mushroom sauce and bring to a gentle simmer. Reduce heat to medium-low, return the steaks to the sauce, and simmer for 1 minute more before serving.

Serving Size: Makes 2 servings of steak with onions and mushrooms