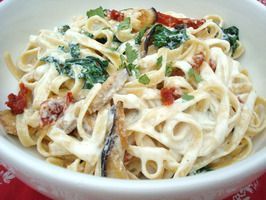 Minutes to Prepare: 25
Minutes to Cook: 10
Number of Servings: 6

Cook the fettuccine according to package directions.

In a large skillet, saute mushrooms in a little water over medium-high heat. Cook until they are soft and lightly browned.

Cook spinach according to package directions and drain.

In a large skillet, saute the onions with a little water, salt and pepper until soft and translucent. Add the garlic and let cook a few more minutes. Remove from heat and set aside.

Put the almond milk into the blender and process with the onion mixture and miso. Season with salt and pepper to taste. Before use, heat the sauce over a very low flame until hot.