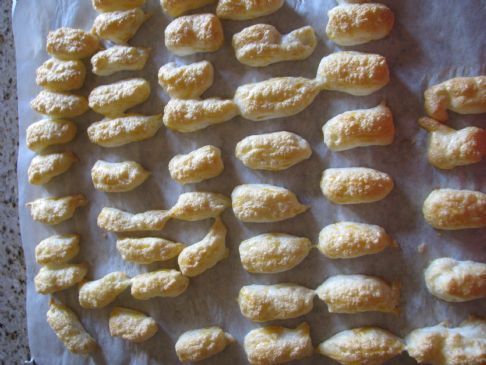 Preheat oven to 300 degrees. Put the frozen cheese in a food processor/blender and chop, until it's in tiny little pieces.

In a mixing bowl, whip the whites with cream of tartar until VERY stiff peaks form. Sprinkle the chopped cheese, on top of the egg whites. Then, with a rubber spatula, fold the cheese into the egg whites, VERY CAREFULLY, being careful not to disturb the fluffy whites, but thoroughly spread the cheese, throughout.

Carefully place the mixture into a large Ziplock baggie, cut a ½ inch hole in the corner of baggie. Gently squeeze onto cookie sheet in CHEETO-like shapes. I would suggest using a sheet of parchment baking paper, to line your pan, but if you don't...grease the pan. Lightly sprinkle grated parmesan cheese, on top of each puff.

Bake at 300 degrees, for 20-30 minutes. The longer you can bake them (without them getting too brown), the crispier they will be. For even crispier puffs, turn off the oven, and leave them in the oven for at least 30-minutes. Store in a tightly sealed, air-tight container. Makes 6 servings.