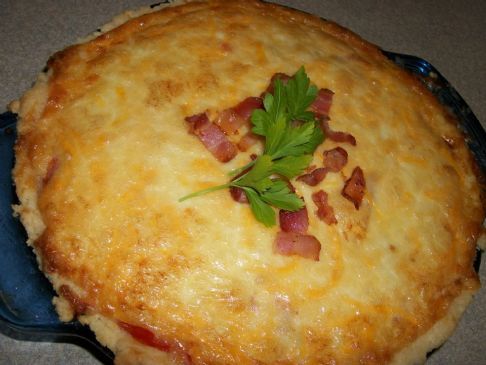 I made my first on 10/7/11, and we've made four so far in the first half of 2013. An excellent church/picnic/special occasion decadence recipe.

Pictured: garnished with some bacon and cilantro I made my first on 10/7/11, and we've made four so far in the first half of 2013. An excellent church/picnic/special occasion decadence recipe.

Pictured: garnished with some bacon and cilantro

Why liquor? Nothing's worse than a soggy crust, but you do need the dough to be pliable. Using liquor makes it wet enough to work, but it bakes out more quickly than water so the crust is crispy.

How to Roll Out Pie Crust: http://www.youtube.com/watch?v=6UjUM9tW-Bg

I tried to double the pie crust recipe to produce three spares for the freezer, but it's too large. I would definitely encourage you to make the one spare included in this recipe. It saves so much time. Wrap tightly in air proof container, or it'll dry out.

The night before:
Thinly slice the tomatoes 3/8 inch thick, salt them, and let them drain overnight in the fridge.

For the crust:
Whisk together flour and salt. Using a fork, knife, two forks, or pastry blender to gradually cut in both butter and shortening. If you have a food processor, you can pulse until it looks like cottage cheese. Add liquor and stir. Add water and stir. If cannot be made into a cohesive ball add water a teaspoon at a time. If the dough is wet and leaves slimy residue on your hands, gradually work in some more flour. Divide into two, shape as disks, and put one each in the freezer and fridge.

At least an hour later, pull the dough out of the freezer and roll out. (See reference below.)

Fill the crust with pie weights or beans on top of tinfoil or parchment. Bake 30-35min at 350F. Remove and let cool.


For the filling:
Cook bacon in a frying pan with enough water to cover. Once most of the liquid has evaporated, add the onion and sautee. The entire process should take 35 to 45 minutes.

Layer half of the tomatoes in the prebaked crust. On top of this, layer of the bacon/onion mixture as well as the basil and oregano Layer on remaining half tomatoes.

Mix a cheddar cheese, mozzarella, and mayo and spread over the top of the pie. Bakeake at 350 or so until the top crust is bubbly and golden-brown, like a pizza.