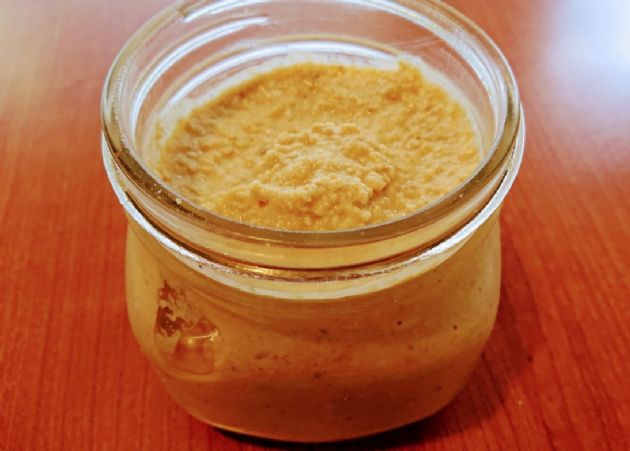 Minutes to Prepare: 15
Number of Servings: 4

a great variation is add roasted red peppers! Just reduce the aquafaba a bit, it might end up too thin.

Bring about 4 cups of water to boil. When boiling, add the cashews. Reduce heat to a simmer and let blanch for five minutes.

Drain the blanched cashews and add to a food processor or blender.
Process until pretty fine- doesn't have to be perfect. use a little aquafaba if needed to get the cashews into a soft paste.

Add the lemon juice, spices and 1/2 cup of the aquafaba. If you're adding raw garlic, either finely mince or run through a garlic press.

The spices are my personal preference. See what you think. Some also like dill in this recipe.

Add just a splash of brine. Can be from olives, pickles or pickled peppers- just depends on which of those you like best. I prefer kalamata picking brine but I love the flavor of pickles and hummus, so sometimes I choose that.

At first, add two pinches of kosher salt and a couple of grinds of pepper. You will probably add more to taste later. You may also want another 1/4 cup of lemon juice, but I try to keep things low acid.

Begin processing. It it will be thick at first. Have some aquafaba standing by. Drizzle in the olive oil. I use a 1/2 tbl but you might want the full tbl. Experiment! Stop processing and use a spatula to push everything back down and to mix in any stubborn chunks. Pulse at this point, drizzing aquafaba until it's as smooth and thin as you like. I usually use a cup for this.

Enjoy as you would any hummus! This is milder and creamier than the original thanks to the cashews.