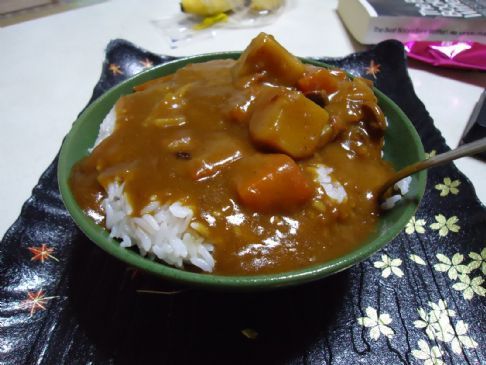 For the mushroom stock:
1 - in a bowl hydrate the dried shitake mushrooms with the water and sit for at least 2 hours. Better if you prepare it in the previous day.

For the stew:
2- cut the eggplant, the carrots and the potatoes in bite-size chunks
3- slice the hydrated shiitake mushrooms, after taking out the stems (the stems can be used too, but as they're harder cook it with the harder ingredients)
4- smash the garlic cloves and take out the skins
5- take 1 onion and chop thinly, and take the other cutting in large pieces
6- Peel the ginger root and grate or slice it thinly
7- Remove the chili pepper seeds and slice it thinly
8- Heat a Casserole and add the canola oil
9- Add the bay leaves, the chili pepper and the ginger, stir until the chili pepper starts to became faint red
10- Add the chopped onions and stir until the onion become medium brown, and then add the garlic until it become lightly brown
11- Add the diced chicken breasts, the eggplant, the potatoes and the onions. Stir until the chicken become white.
12- Add the mushroom stock, the sake, the soy sauce, the sesame seed and the salt and let it cook until the carrots become soft (al dente)

For the Curry roux:
13 - in a fry pan toast lightly the peppers, the ground coriander seeds. When the fragrance comes out reserve it.
14- In the same pan toast the white flour until it become a very clear brown, and then add the curry powder and the pepper and coriander mixture. Toast it for 1 minute.
15- Add the unsalted butter melted and mix until the ingredients become a paste.

For the assembly:
16- when the stew is done (the carrots become al dente), dilute the paste of the curry in the soup stock from the stew in a little bowl.
17- mix the diluted curry roux in the stew and let it simmer, in low heat until become thick. Turn off the burner.
18- Grate the apple unpeeled and mix it to the stew

* kakushi aji - the secret ingredient is a ingredient that enriches the flavor of the curry. There are several ingredients that can be added that has different effects in the taste.
Apple - give more sweetness
Coffee (black) - get a more round taste to the curry
chocolate - gives some sweetness and enriches the aftertaste of the curry