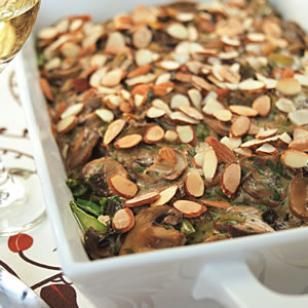 Minutes to Prepare: 45
Minutes to Cook: 1
Number of Servings: 8

Make Ahead Tip: Prepare through Step 5; cover and refrigerate for up to 2 days or freeze for up to 1 month (defrost in the refrigerator for 2 days before baking). Let stand at room temperature for 30 minutes, then bake at 350°F for about 1 hour.

Note: Sherry is a type of fortified wine originally from southern Spain. Cooking sherry sold in many supermarkets can be high in sodium. Instead, get dry sherry thats sold with other fortified wines at your wine or liquor store.

1. Combine water and rice in a small heavy saucepan; bring to a boil. Cover, reduce heat to maintain a simmer, and cook until tender, 35 to 40 minutes. Drain.

2. Meanwhile, place chicken in a large skillet or saucepan. Add lightly salted water to cover and bring to a boil. Cover, reduce heat and simmer gently until the chicken is cooked through and no longer pink in the middle, 10 to 15 minutes. Transfer to a clean cutting board and let cool.

3. Heat oil in a Dutch oven or large high-sided skillet over medium heat. Add leeks and cook, stirring occasionally, until just starting to brown, 4 to 5 minutes. Add mushrooms and cook, stirring occasionally, until their liquid has been released and has evaporated, 12 to 14 minutes. Add sherry, increase heat to high and cook until most of the liquid has evaporated, 5 to 7 minutes. Sprinkle the vegetables with flour and stir to coat. Add milk; bring to a simmer and cook for 1 minute, stirring. Stir in Parmesan, sour cream, parsley, salt and pepper. Remove from the heat.

5. Cut the chicken into bite-size pieces. Spread the rice in an even layer in the prepared baking dish. Top with the chicken, then green beans. Pour the sauce over the top and spread evenly. Sprinkle with almonds.

6. Bake the casserole until it is bubbling and the almonds are golden brown, about 30 minutes. Let stand for 10 minutes before serving.