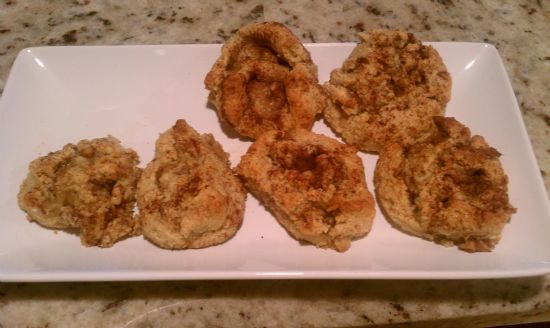 Raisins can be added to the surface of the dough before rolling, but are not included in this recipe/nutritional information

Preheat oven to 340*
Mix the 3 cups of loosely packed almond meal with the salt and the baking powder. In another bowl, mix the room temp eggs, 2 TBSP of the honey, and the coconut oil. Add egg/oil mixture to almond meal mixture, and blend until a sticky dough forms. You can put the dough in the fridge to firm it up a bit, but since it is a gluten free dough, it won't look, feel, or handle the same as a gluten flour dough.

spread out a large piece of wax or parchment paper on the counter. Take the dough and plop it onto the parchment, using your fingers to pat and spread the dough into a large rectangle, about 1/4 inch thick. Original recipe called for a rolling pin, but the stickiness of this dough just won't work with a rolling pin, in my opinion.

Once you've patted the dough out, drizzle remaining half TBSP of honey over entire surface, and sprinkle with cinnamon and splenda brown sugar blend. Beginning from short end, lift wax paper to assist you in rolling up the dough, jelly-roll style, Taking care not to tear the dough.

Using a clean knife, cut half-inch (approximately) segments, and place them on a nonstick-sprayed baking sheet. I was able to make 10 decent sized cinnamon rolls.

Bake for 10 to 15 minutes, checking at 10. Undercooked is better than overcooked, when working with almond flour, as it tends to burn and harden. You want the rolls to be just turning golden/browned. Remove and let cool slightly. Enjoy!