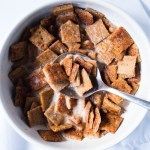 Pour in egg and with the food processor running. Stop once dough comes together into a ball. Wrap the dough in cling film and allow to rest for 10 minutes (very important!).

Work in batches. Line counter with parchment paper. Turn out half the dough, and place another parchment paper (or wax paper) on top and roll it out as thin as you can.

Using a ruler, cut dough lengthwise and then crosswise. Prick each piece with a small fork.

Transfer parchment paper with the cinnamon toast crunch to a baking sheet or tray. Bake for 4 minutes, remove from oven, brush with melted butter and sprinkle with cinnamon sugar. Return to oven for 6-8 more minutes. As each oven is different, watch out after minute 8 for excessive browning (ours is ready at minute 11).

Transfer to a rack straight away to avoid continued browning.

Allow to cool completely before enjoying, as they will crisp up when cooling. Once cool, break the pieces apart and store in an airtight container for up to 5 days. Do note that you can always freeze part of the dough, allowing it to thaw completely in the fridge before using.

And if by any reason your cereal won't crunch up (humidity or varying flours): turn on your oven, let the temperature reach 350°F/180°C, turn it off, pop your trays with the cereal back inside, and leave them there for 20 minutes. They'll be sure to dry out and crunch up after cooled.