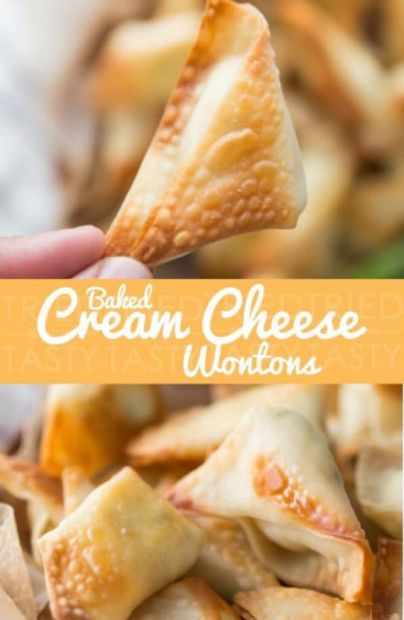 Place about 1/2 tsp cream cheese in the center of a won ton wrapper. Wet your finger with water and moisten the edges of the wrapper. Fold won ton in half to make a triangle, sealing the cream in the won ton well (the water acts like glue). Moisten one corner of the won ton with more water. Bring the bottom edges of the won ton together, overlapping slightly to form a won ton appetizer shape. If you like, you can skip this step and just make triangles. Repeat for the rest of the won tons.

Place won tons on a nonstick cookie sheet sprayed with Pam. Spray won tons with a bit of Pam. It seems weird, but it helps the won tons brown in the oven. Bake won tons at 400 for 7-12 minutes or until golden brown and crispy.

Not as greasy (or crispy) as your typical fried Chinese restaurant appetizer, but a great healthy substitute when you have a craving!