I got this receipe from the Weight Watchers cook book - this is only 5 points per serving!!

(no ratings)
Soba noodles with cabbage and cucumber
Submitted by CMORRIS_5


This is a family favorite! When I need a chinese food fix this is low fat and delish!!

(no ratings)
Chicken and Veggie Stew
Submitted by ESMAHAN


Super Simple and quick to make!

(no ratings)
Chicken Adobo trimmed up a little


From a friend from the PI. They usually use an entire chicken and chop it up when they make this for us. I've discovered that breast meat doesn't hold the flavor as well. They also marinate the chicken with the skin on over night before cooking it. Once it's tender, they would take it out and fry the chicken in oil which I also skip since I don't want to consume the skin anyway. Also, note that the sodium calculation is very high but it's assuming that you're consuming the liquid along with the chicken which isn't needed. 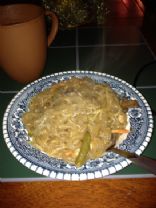 
Something I snagged off of Rachel Ray's site...I kinda modified it. No picture yet.


A rich desert with the nip of ginger to make the tofu more interesting. It's also a fast desert to make up if a sweet craving hits and you don't want to eat other more deadly sweets. ;)

(no ratings)
Tofu and Chive Soup


So simple yet surprisingly good. The simplicity of ingredients bring out the natural flavours so they can be appreciated.